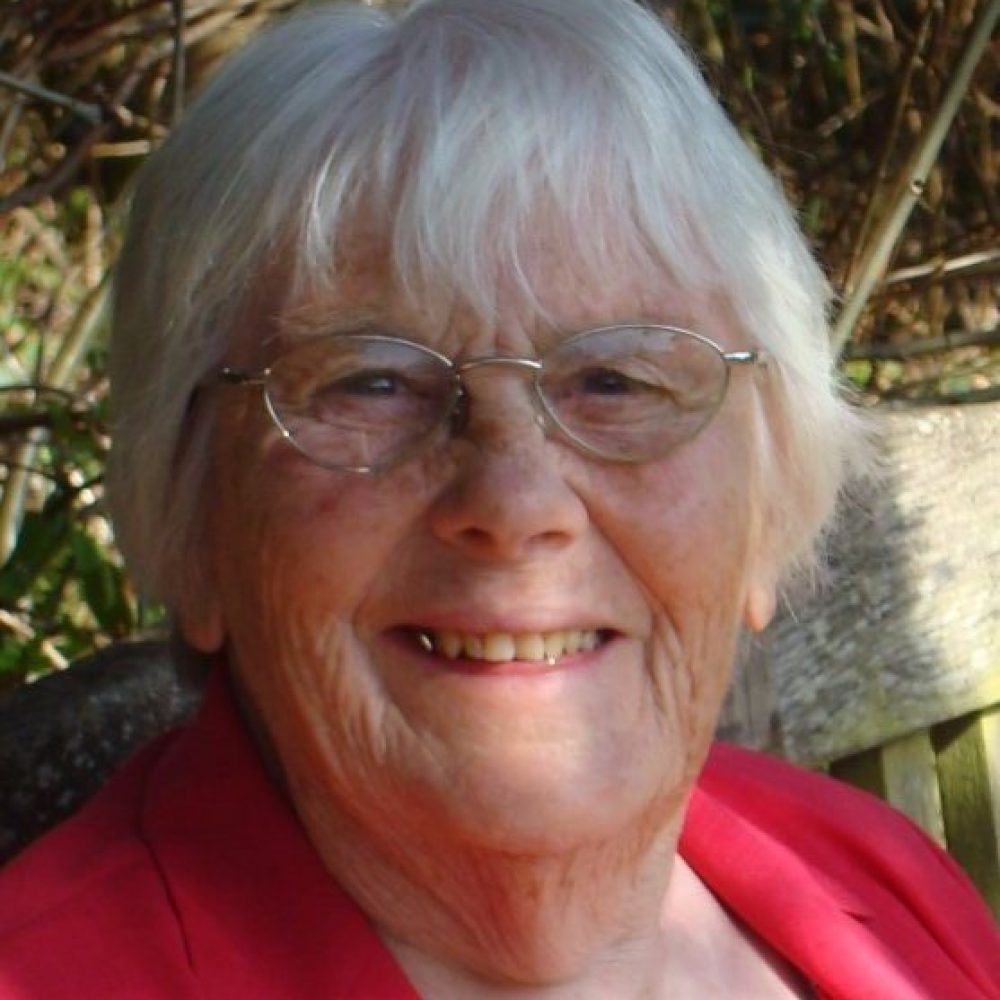 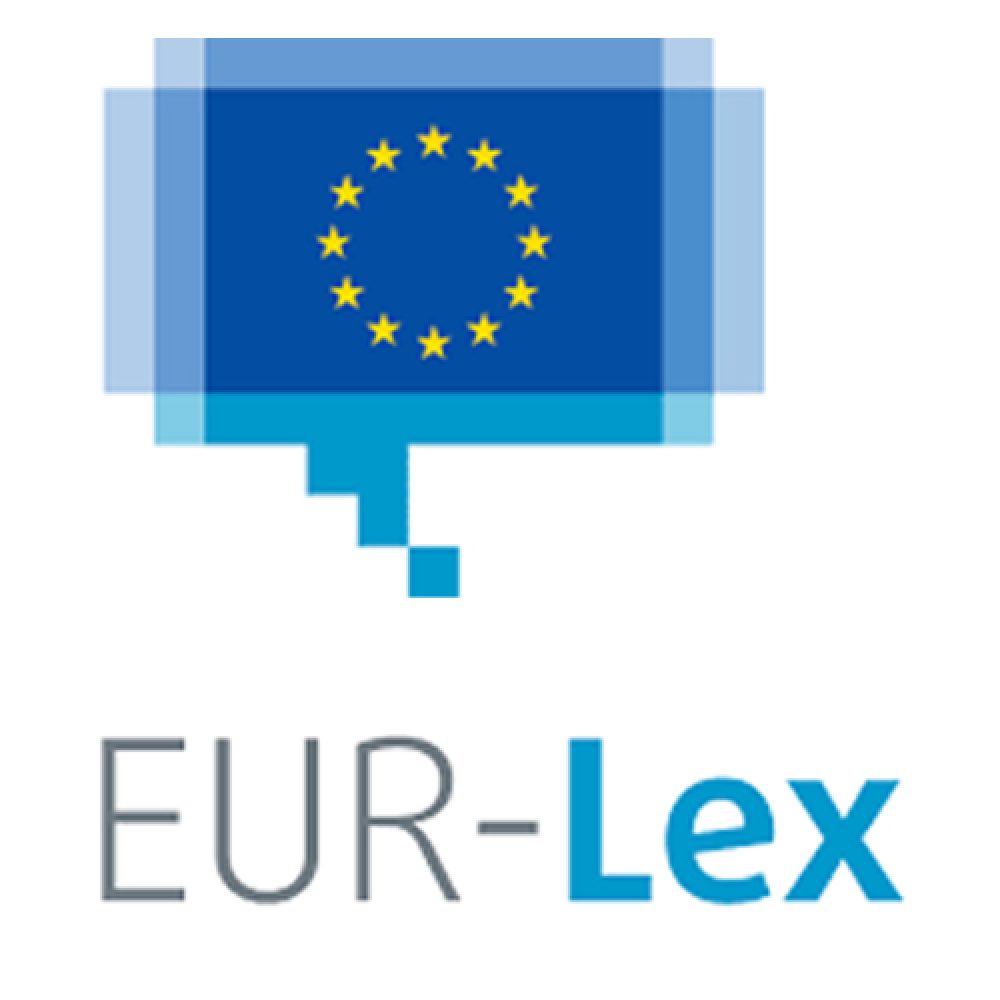 The new EC Guidance documents for the EU ABS Regulation

The long-awaited update of the first guidance document of 2016 was adopted and released by the European Commission on 14 December 2020. The new Guidance document C(2020)8759 (with Annexes I and II) incorporates and complements the previous document, and was again developed in consultation with stakeholders from all important sectors, including experts from the field of culture collections. It explains the scope of application and obligations under the Regulation (EU) No 511/2014 (EU ABS Regulation), and provides numerous example cases. Importantly, several issues that were not or were insufficiently treated in the 2016 guidance document, have now been clarified, such as how to deal with screening studies and laboratory strains. The question whether digital information on genetic resources (especially digital sequence information, DSI) would fall in scope of the Nagoya protocol is still under consideration of the Parties, and thus could not be addressed in this new guidance. EUR-Lex – 52021XC0112(02) – EN – EUR-Lex (europa.eu) 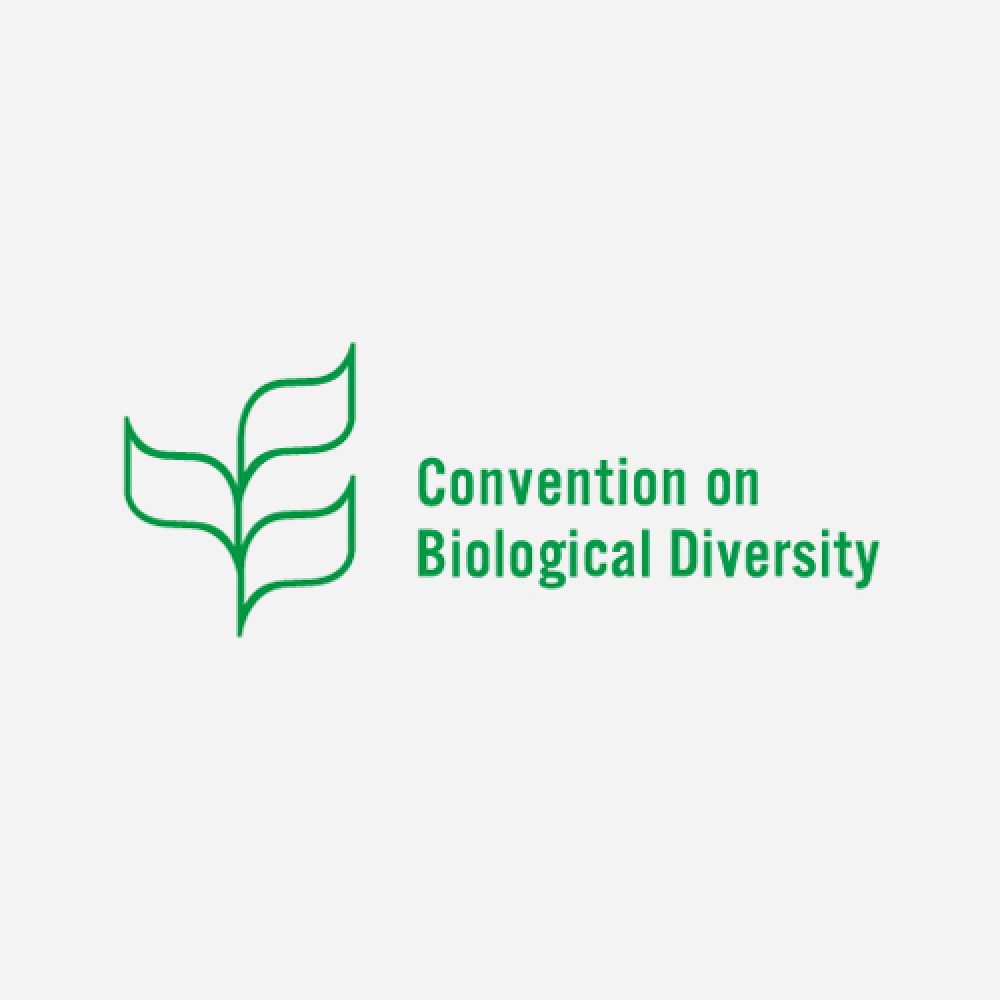 In answer to a request from the CBD Secretariat, the new ECCO model documents for MDA and MTA have been added to the ABS-Clearing House information resource ‘Model Contractual Clauses, Codes of Conduct, Guidelines, Best Practices and/or Standard’ on October 23, 2020 (ABSCH-A19A20-SCBD-252690-1). These models have been published in Annex to Verkley et al., FEMS Microbiology Letters 367, Issue 5, March 2020, fnaa044. https://doi.org/10.1093/femsle/fnaa044 Model Agreement documents, Codes of Conduct, Best practices New ECCO model documents for Material Deposit and Transfer Agreements (2020) – check out the dedicated page on this website here MIRRI Best Practice Manual on Access and Benefit Sharing (Verkley, Martin, Smith 2016) – Developed especially for the practices of culture collections for microorganisms, based on input provided by various ABS experts including representatives of ECCO Corporate Members. https://absch.cbd.int/database/A19 A20/ABSCH-A19A20-SCBD-208213. CETAF Code of Conduct and Best Practices on Access and Benefit Sharing and Material Transfer Agreement Templates ( Consortium of European Taxonomic Facilities 2019). – Developed for the practices of natural science collections in the broad sense, and the first best practice to be officially recognized by the European Commission. 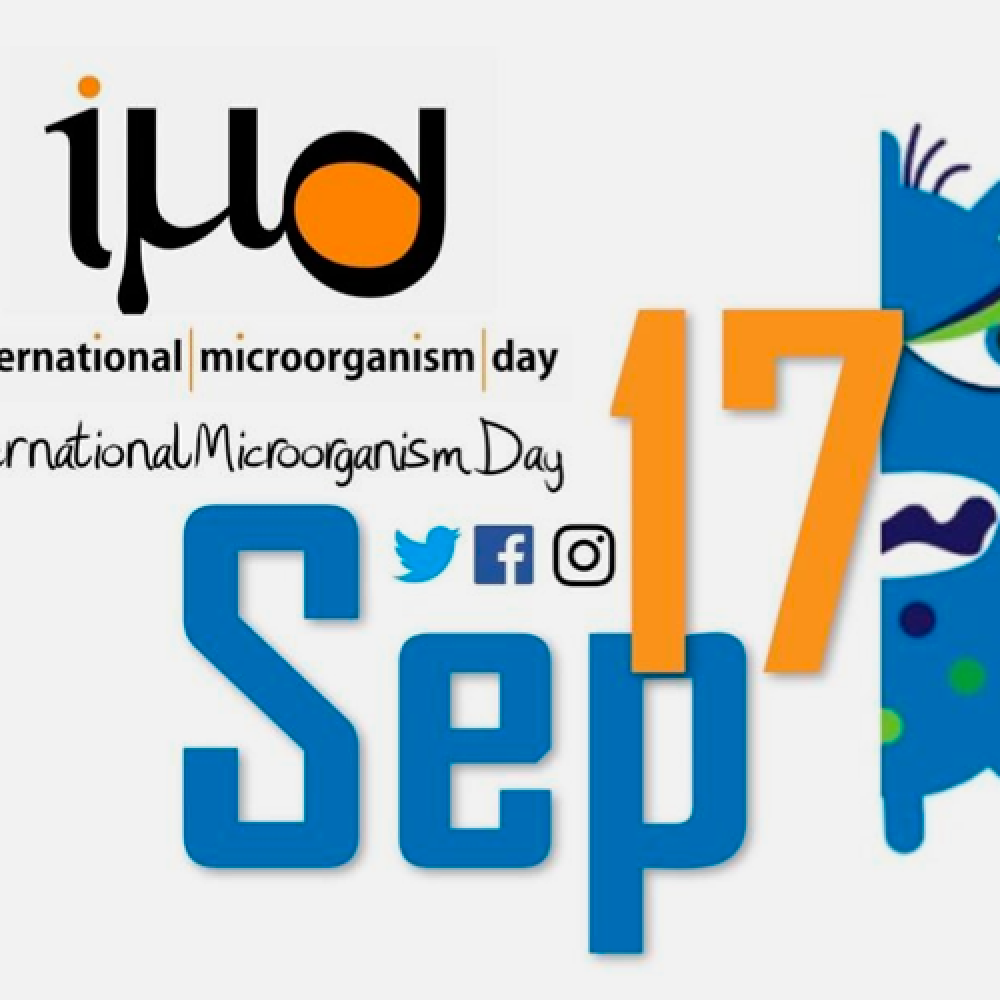 17 September is International Microorganism Day, an opportunity to promote the diversity and variety of microorganisms and a way to encourage everyone to recognize and celebrate the many ways microscopic organisms are important in human health, culture and, throughout our daily lives. International Microorganism Day is an annual celebration of microbiology and this year the Federation of European Microbiological Societies (FEMS) wants to promote the positive contributions of microorganisms in our daily lives given the negative stories associated with viruses in the news. 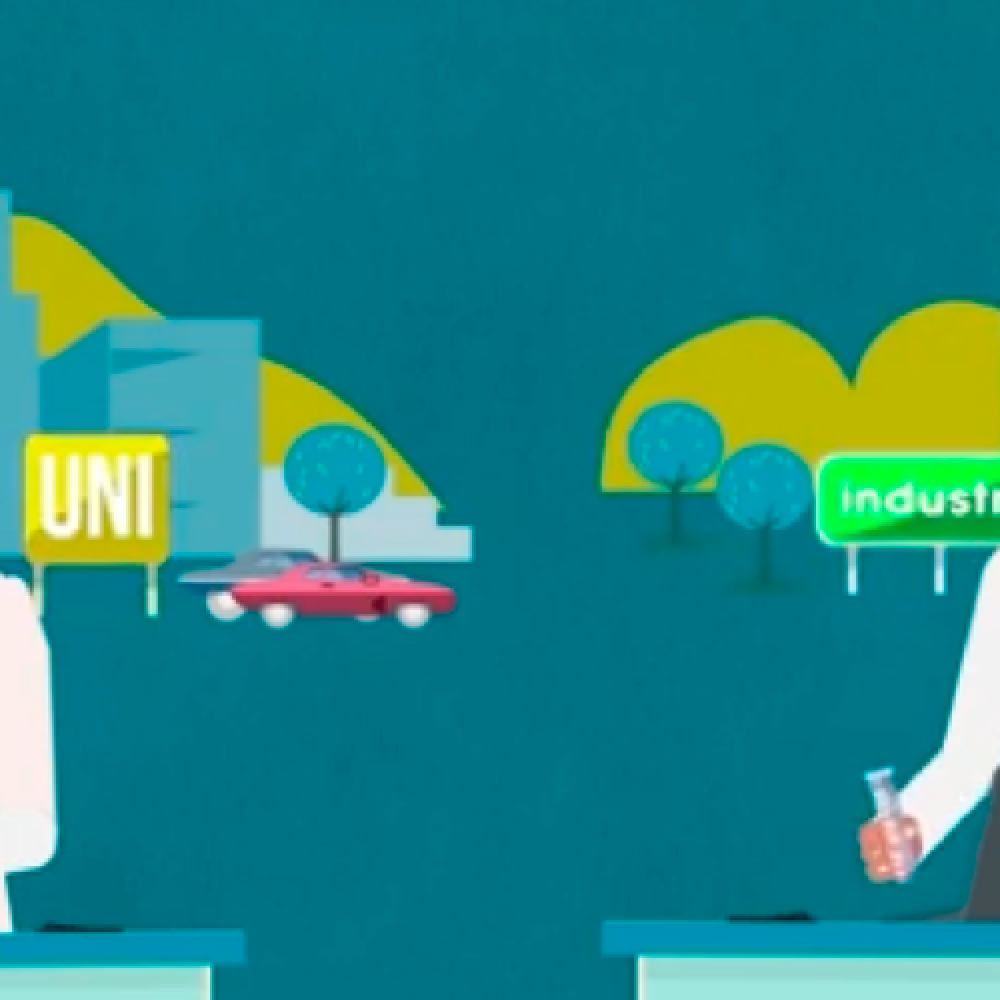 The ELSRI launches its services with a video

European Life Sciences Infrastructures launches this video to show how they can support researchers, through their services.

Venue & Date Programs Presentations Social Poster . . Presentation Dear Colleagues, The University of Turin together with the Mycotheca Universitatis, Taurinensis (MUT) and the Turin University Culture Collections (TUCC) are delighted to invite you to the 38th Annual Meeting of the European Culture Collections’ Organisation (ECCO) which will be held in Turin (Italy), from 12th to 14th June 2019 at the University of Turin. The focus of ECCO 2019 is on “Microorganisms as tools to win the current societal challenges and support European strategies in bioeconomy”. Microorganisms are expected to play a pivotal role in the progress of bio-economy, allowing the achievement of the long-term goal to develop a competitive, resource-efficient and low carbon economy by 2050, as established by the European Commission. The ECCO 2019 meeting is aimed at providing an insight into the innovation ecosystem promoted by Culture Collections and shows its influence in policymaking and sustainable bio-economy in the European Union, whose market is currently about € 2.4 billions and employs 22 million people. The transition in a changed EU policy context and towards a new environmental, social and economic reality, will rely on the advancement in technology of a range of processes, as well on the achievement of a breakthrough in terms of technical performances and cost effectiveness, and will depend on the availability of sustainable biomasses and advanced knowledge on the potentialities of microorganisms. In this landscape, the microbial Biological Resource Centers (mBRCs) are fundamental to guarantee to Bioscience and Bioindustry not only to access to a broad range of high quality bioresources and the latest technology but also to foster knowledge transfer, education and training. We look forward to seeing you in Turin. The Organizing Committee . . Organizers, sponsors, collaborators . . . . . . 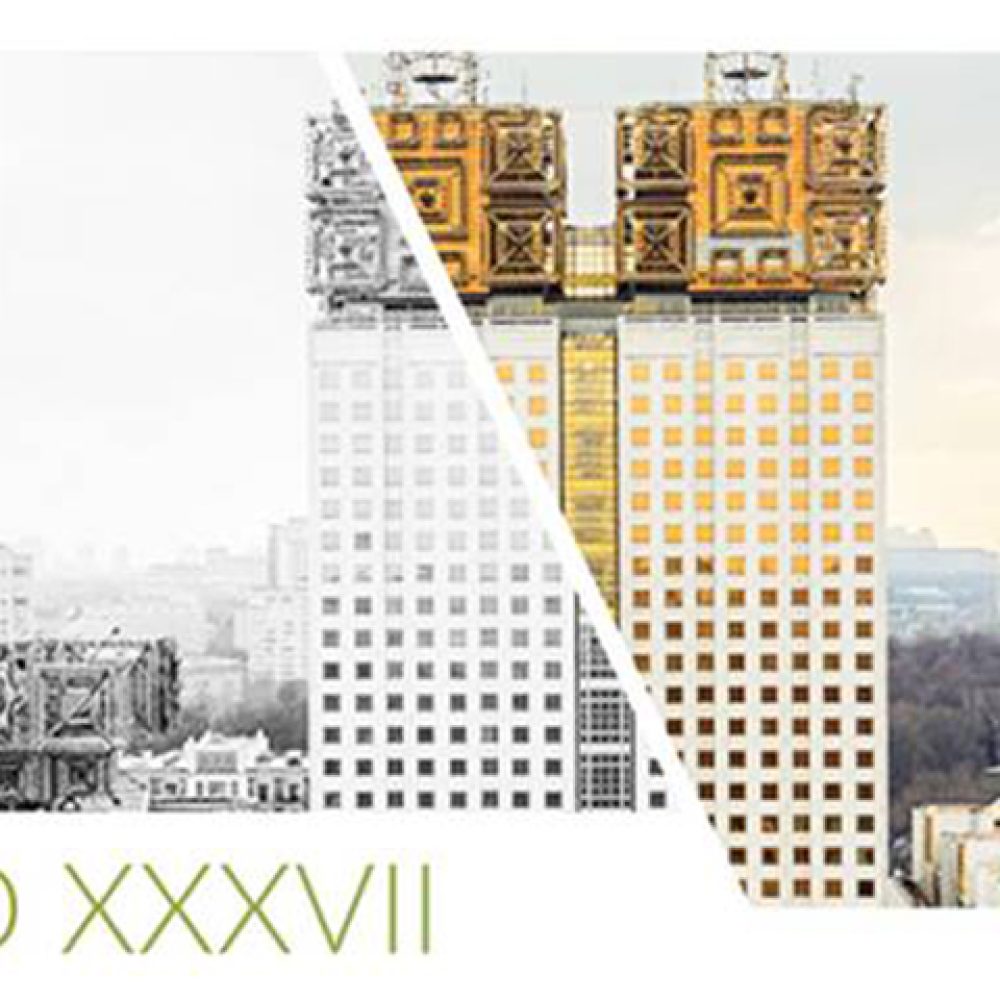 Venue & Date Programs Presentations Social Poster . . Presentation Dear Colleagues, The European Culture Collections’ Organisation (ECCO) and the consortium of Russian collections of microorganisms invite you to the XXXVII ECCO meeting to be held in Moscow 13-15 September, 2018. The success of previous ECCO meetings demonstrates that personal contacts among the active professionals from culture collections are of great importance for exchanging best practices in this field and are not replaceable by the modern technical communication tools.Activities related to culture collections are multifaceted. Microorganisms are in the focus of attention. Culturing of previously non-culturable microorganisms and gaining insight into microbial associations change our perception of them from a “thing-in-itself” to a “thing-for-us”. Cultivable microorganisms and microbiomes should be studied and preserved with minimal losses to provide different customers with standard high-quality biomaterials. Culture collections, having the status of Core Facilities, are expected to follow the commonly accepted and approved practices in biosafety, biosecurity and legitimate transfer of genetic resources. The ways to achieve these goals will be discussed at the XXXVII ECCO 2018 meeting. The meeting will follow the spirit and style of the previous ECCO meetings. . . Organizers, sponsors, collaborators . . 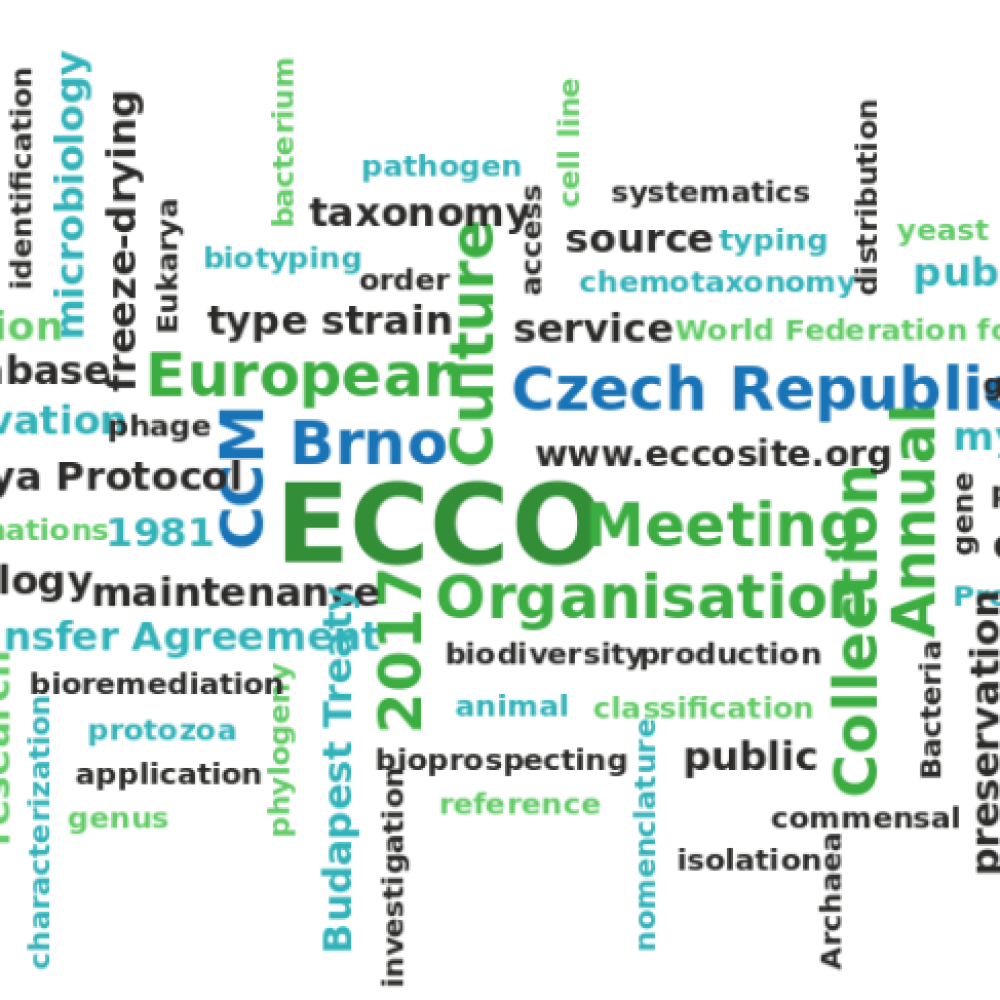 Venue & Date Programs Presentations Social Poster . . Presentation The European Culture Collections’ Organisation (ECCO) and the Czech Collection of Microorganisms (CCM) invite you to the XXXVI ECCO meeting held at the Masaryk University Campus in Brno from September 13 to September 15, 2017. The aim of the ECCO 2017 meeting is to develop a platform for contacts and discussions between experts from culture collections to support cooperation between professionals in this field. The meeting will follow the spirit and style of the previous ECCO meetings. The program will include presentations from guest speakers, oral talks and poster sessions. We hope to have the honour of welcoming you to the ECCO 2017 meeting in Brno. Best regards,Organising Committee . Organizers, sponsors, collaborators . The ECCO 2017 meeting is organised by the Czech Collection of Microorganisms on behalf of the European Culture Collections’ Organisation . 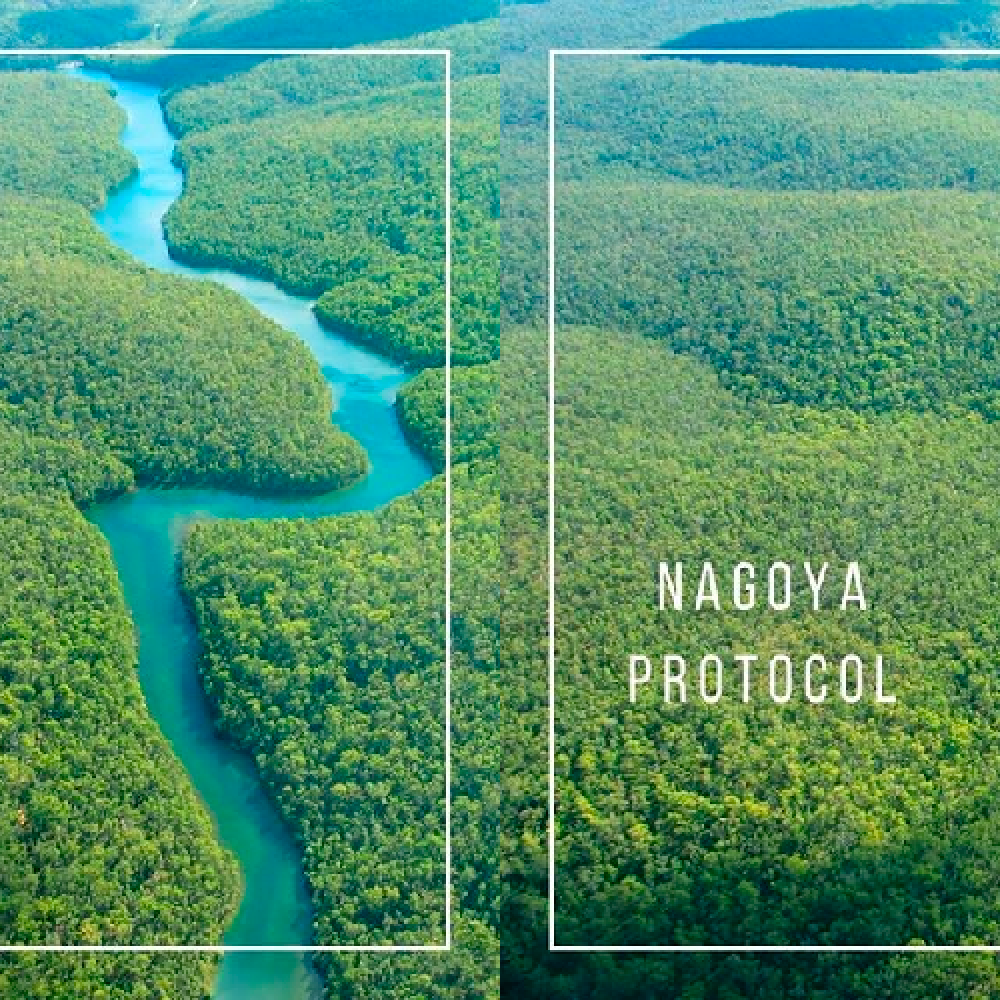 Culture collections and Access and Benefit Sharing (Nagoya Protocol) . The Convention on Biological Diversity (CBD) entered into force on 29 December 1993. Its aims are to conserve biological diversity, foster its sustainable use, and the fair and equitable sharing of benefits arising from the utilization of ‘genetic resources’ and/or traditional knowledge associated with such resources. According to the CBD, genetic resources are defined as ’genetic material of actual or potential value’ and genetic material is defined as ‘any material of plant, animal, microbial or other origin containing functional units of heredity’. So, the biological materials typically preserved in culture collections fall within scope of the CBD. However human cell lines, as all human genetic resources, are out of scope of the CBD. The CBD recognizes the sovereign rights of countries over their own ‘genetic resources’, and countries are expected to grant access to their genetic resources (and associated traditional knowledge) and can determine the conditions for access. The Nagoya Protocol entered into force on 12 October 2014. Parties to the Protocol may regulate access to their genetic resources and require ‘Prior Informed Consent’ (PIC) from the competent national authority and the settling of ‘Mutually Agreed Terms’ (MAT) between provider and user of the genetic resources. Countries can also decide to provide “free” access to their genetic resources, so without any ABS requirements. Yet, all Parties are obliged to take measures to monitor the use of foreign resources within their territory, and assure that users comply with ABS legislation of the provider countries of those genetic resources. The European Union adopted the Regulation (EU) No 511/2014 (EU ABS Regulation), which also entered into force on 12 October 2014. This regulation governs user compliance measures and benefit sharing within the EU, but it does not deal with access to the genetic resources as this is left to the individual Member States. The EU ABS Regulation is complemented by the Commission Implementing Regulation (EU) 2015/1866 (EU 2015) providing detailed rules as regards the register of collections, monitoring user compliance and best practices. As supporters of the goals of the CBD and long-time contributors to ex-situ conservation of (microbial) biodiversity, culture collections have been actively involved in various fora and stakeholder meetings organized by the ABS policy makers at national, European and global level. Whenever possible, they have clarified practical implications and the potential negative impact of ABS regimes on collection management, microbiology and open science in general, and bioeconomic development. Initiatives were taken to develop Codes of Conduct, Best Practices, Model Agreement documents and other tools to support culture collection staff and the users of resources in public collections to comply. Below several useful links are provided. Information resources on ABS The Access and Benefit Sharing Clearing House (ABSCH) – ABSCH | Access and Benefit-Sharing Clearing-House (cbd.int) The EU pages on Access and Benefit Sharing – Environment – European Commission – Biodiversity – International – Genetic resources and ABS (europa.eu) The German Nagoya Protocol Hub – Especially interesting are the cases presented of successful applications for PIC and MAT in countries worldwide. https://www.nagoyaprotocol-hub.de/https://www.nagoyaprotocol-hub.de/ 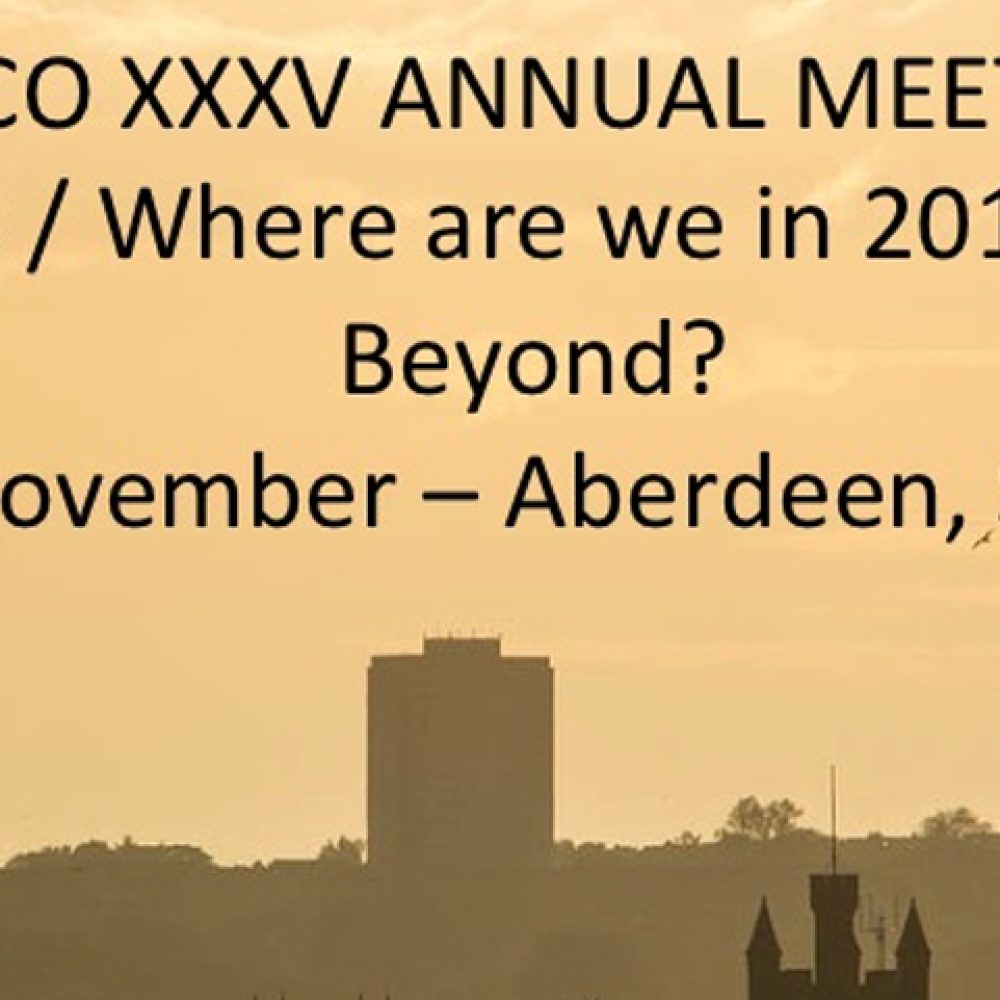 Venue & Date Programs Presentations Social Poster . . Presentation We are proud to announce the next ECCO meeting that will be held in Aberdeen, Scotland between the 2nd and the 4th of November 2016. 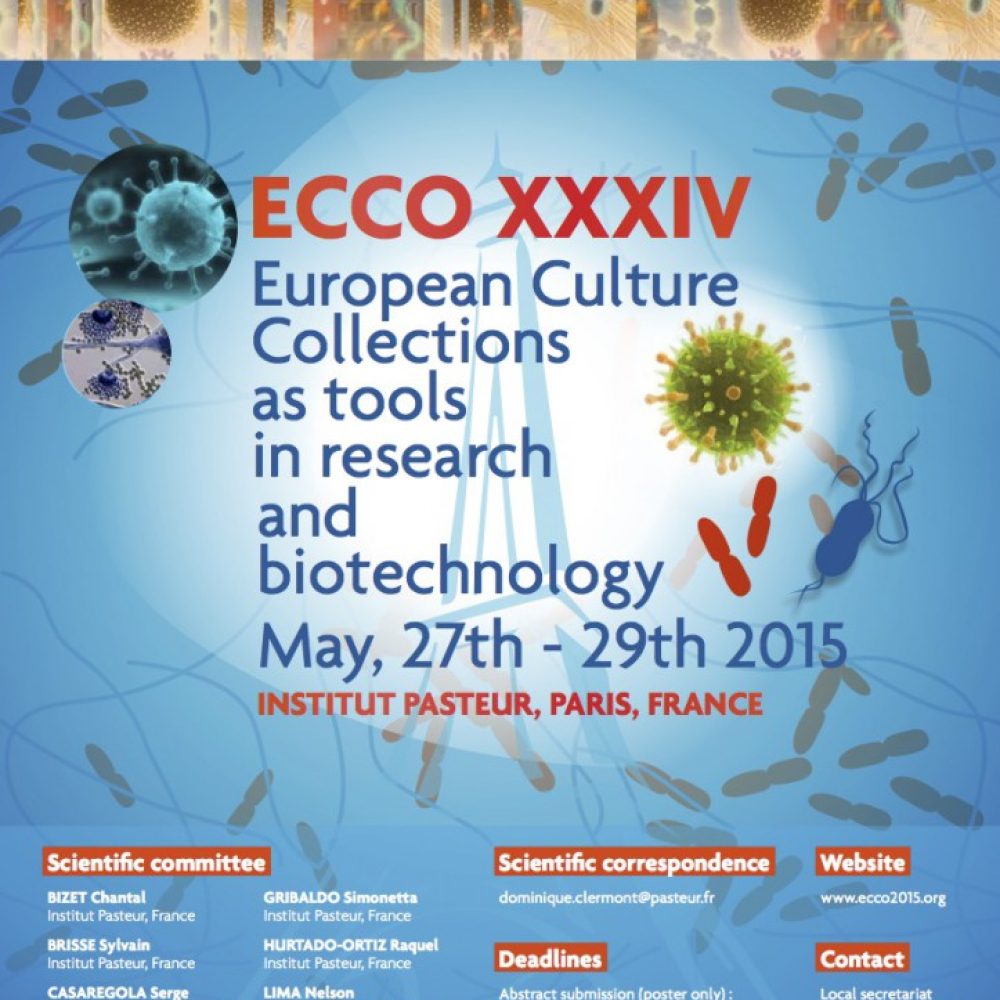 Venue & Date Programs Presentations Social Poster . . Presentation The Biological Resource Centre of Institut Pasteur (CRBIP) organizes the ECCO meeting 2015 which will be held at the Institut Pasteur in Paris, France from May 27th to 29th. The meeting brings together the European community of professionals on Microbial Culture Collections, and will address the future challenges of Biological Resource Centres regarding the adaptation to the needs and requirements of academics and bio-industry. The theme of the ECCO XXXIV is: “European Culture Collections as tools in research and biotechnology”. The meeting will be focus on taxonomy/ evolution, biodiversity, omics, regulations and news about MIRRI (Microbial Resource Research Infrastructure: www.mirri.org) and other ESFRI infrastructures. Dr. Ilse Cleenwerck of the BCCM/LMG Bacteria Collection will give a presentation at ECCO2015 entitled “New insights in the taxonomy of plant-pathogenic and -associated bacteria in the Enterobacteriaceae, based on MLSA data”Collection: BCCM coordination cellBCCM/LMG Bacteria Collection . . Organizers, sponsors, collaborators . . 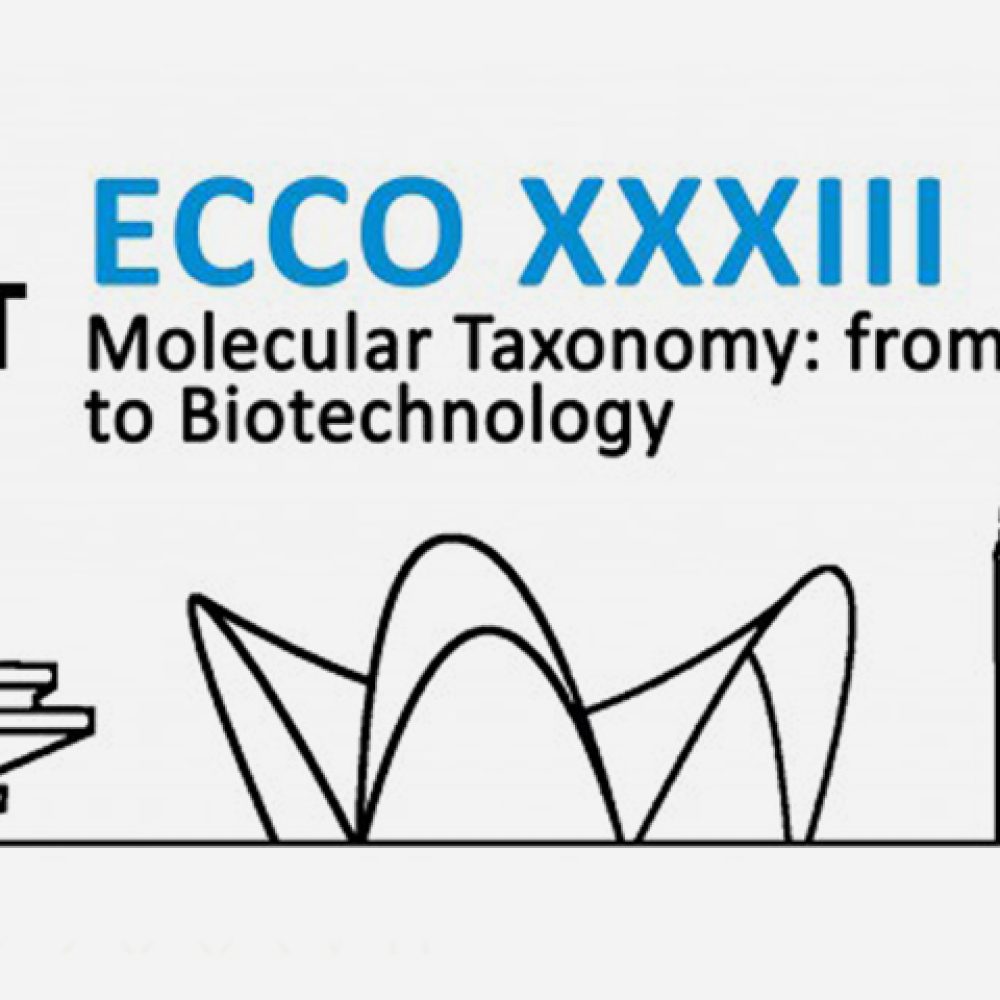 Venue & Date Programs Presentations Social Poster . . Presentation On behalf of the ECCO Board and the Organizing Committee, the CECT cordially invites you to attend the 33rd Annual Meeting of the European Culture Collections’ Organisation, which will be held at the Conference Centre ADEIT–Fundación Universidad-Empresa situated in the historic down town of Valencia.With the motto ‘Molecular Taxonomy: from biodiversity to biotechnology’ and through six symposia, we hope to foster debate in aspects related to advances in microbial isolation and preservation, molecular methods for identification and community analysis, biotechnological applications of microorganisms, patent issues, access and benefit sharing, information exchange among data-bases, public services, … We are looking forward to seeing you in Valencia!Rosa AznarCECT Director . . Organizers, sponsors, collaborators . .